LAUNCH OF 'BY THE FIRESIDE'

The spirit of the ‘Year of Return’ appears to, indeed, be bringing back a lot of valuable resources, people, events and memories of or from the good old days.

Among these is the all-time best children’s television programme, ‘By The Fireside’ with amazing Grace Omaboe (popularly known in the showbiz circles as Maame Dokono) which is re-invented to be a stage production.

For years, there have been intense crave for the return of this outstanding children’s television programme which made a lot of waves in the 90s.

This, undeniably, caused several attempts by different institutions to re-invent the programme in different forms. The sad truth, however, is that all these efforts could not meet their targeted objectives. 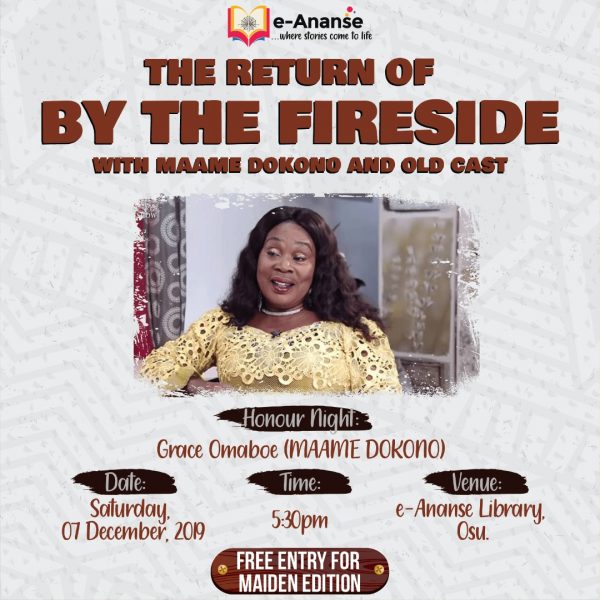 Thankfully, in the spirit of the ‘Year of Return’, the rays of this long dreamt dream have, at last, found a converging point. Thus, e-Ananse Libraries has been successful in uniting some of the old cast of the original programme with their mother (Grace Omaboeat 73) on one stage on 7th December 2019.

This will launch a stage version of the event dubbed ‘By The Fireside @ Osu’. As part of celebrating her, the day will also host a conversation with the ace actress, musician and radio/tv host—MaameDokono—after which she would be honoured her for her awesome contributions to the creative art industry. The day will feature traditional spoken word, cultural dance and folk music performances.

‘By The Fireside @ Osu’ is intended to be a live monthly storytelling event to be held at the e-Ananse Library situated in Osu, 68thRingway, Accra. The event is designed to feature Grace Omaboe and children actors/actresses live on stage in storytelling acts to be directed by Oswald Okaitei, a product of the ‘90’s edition of the programme. ‘By The Fireside @ Osu’ is geared at reviving the storytelling art in the country and also add to the few periodic live art shows in Ghana. Entry is free for the maiden edition and it starts at 5:30pm.